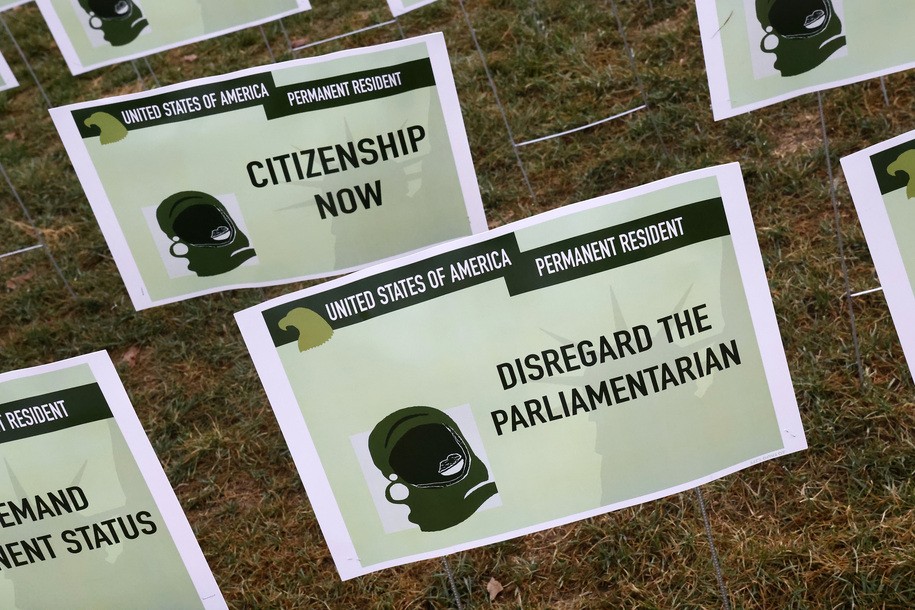 “The decision by the parliamentarian is deeply disappointing and relegates millions to an uncertain and frightening future,” the White House said. “This president, this administration, and our partners on the Hill vehemently disagree with this decision and will keep fighting to give relief and protection to the many Dreamers, TPS holders, farm workers, and essential workers who are living in fear.”

“Time and time again they have shown they are valuable and contributing members of communities in every corner of America,” the statement continued. “Ultimately, it’s time for Congress to stop kicking the can down the road and finally provide certainty and stability to these groups, and make other badly needed reforms to our outdated immigration system. Fixing our immigration system is the smart and the right thing to do.”

That statement did not call for senators to overrule MacDonough, a Senate staffer who reportedly worked to deport immigrants when she served as a prosecutor roughly two decades ago, Latino Rebels reported last month. But many affected individuals and their advocates did.

“It’s unsurprising that the unelected parliamentarian continues to show her aversion to fulfilling the duties of her appointed role,” NAKASEC Action Fund digital organizer John Kim said in a joint statement with the UndocuBlack Network. “Fortunately, Vice President Harris can and must ignore the parliamentarian’s arbitrary opinions and include a pathway to citizenship in the federal budget package. Immigration passes the Byrd Rule and is therefore considered to be aptly included in the federal budget reconciliation. Democrats, stop hiding behind irrelevancies and pass a pathway to citizenship this year.”

In a second statement received by Daily Kos, United We Dream Action executive director Greisa Martinez Rosas said the organization is “unapologetic about calling on Senate Democrats to disregard the parliamentarian and to reject this anti-democratic, white supremacist roadblock that only serves to keep Black and brown, working class people, both undocumented and documented, from being included in monumental legislation. This is a fight about racial justice.”

United We Dream Action is among the groups planning to rally in Washington, D.C., Friday to urge Senate Democrats to overrule MacDonough. Lawmakers in the House issued a joint statement Thursday evening urging the same.

“We’ve said it before, and we will say it again: at this point, the Senate can—and must reinstate a pathway to citizenship in the Build Back Better Act, even if that means disregarding the Senate Parliamentarian and bringing that vote to the Senate floor,” Congressmen Lou Correa, Adriano Espaillat, and Chuy García said in a release received by Daily Kos. “History will take note of those who for so long have championed delivering for our communities, but have delivered nothing but inaction, empty promises, and dreams deferred.”

In the days leading to MacDonough’s nonbinding advice, some Senate Democrats had been “signaling a new willingness” to overrule her, the Los Angeles Times reported. West Virginia Sen. Joe Manchin, of course, has remained opposed. On Friday, Nevada Sen. Catherine Cortez Masto signaled her support. “I think we should use the rules that we have. And if you’re talking about sidestepping and disregarding her advice, yes, I would disregard her advice,” CQ Now reports she said. Also on Friday, Sen. Alex Padilla said “all options are on the table,” Latino Rebels reported.

“This is a helluva way to run a democracy. An unelected staff attorney in a supposedly non-political role makes yet another political decision to thwart the freedom and futures of millions of undocumented immigrants,” America’s Voice executive director Frank Sharry said. “What’s next? Disregard the parliamentarian’s advisory opinion? We’re for it. Develop other tactics and options to produce a breakthrough? We’re open to hearing them. But the onus is on Democrats to use their majority to keep their promise. We are not interested in excuses, we are interested in results.”

Trump once more telegraphs his plans to steal the 2024 election. The media yawns

Ukraine update: 70% of Severodonetsk is back under the control of Ukraine, heavy fighting continues

Smoke and dust rise above the streets of Severodonetsk. At some points in the war, it’s been not only possible, but

Trump-backed Kelly Tshibaka, who is challenging Republican Sen. Lisa Murkowski for her Alaska seat, is the latest GOP Senate hopeful to

Abbreviated Pundit Roundup: The outrage at the shooting and the aftermath is growing